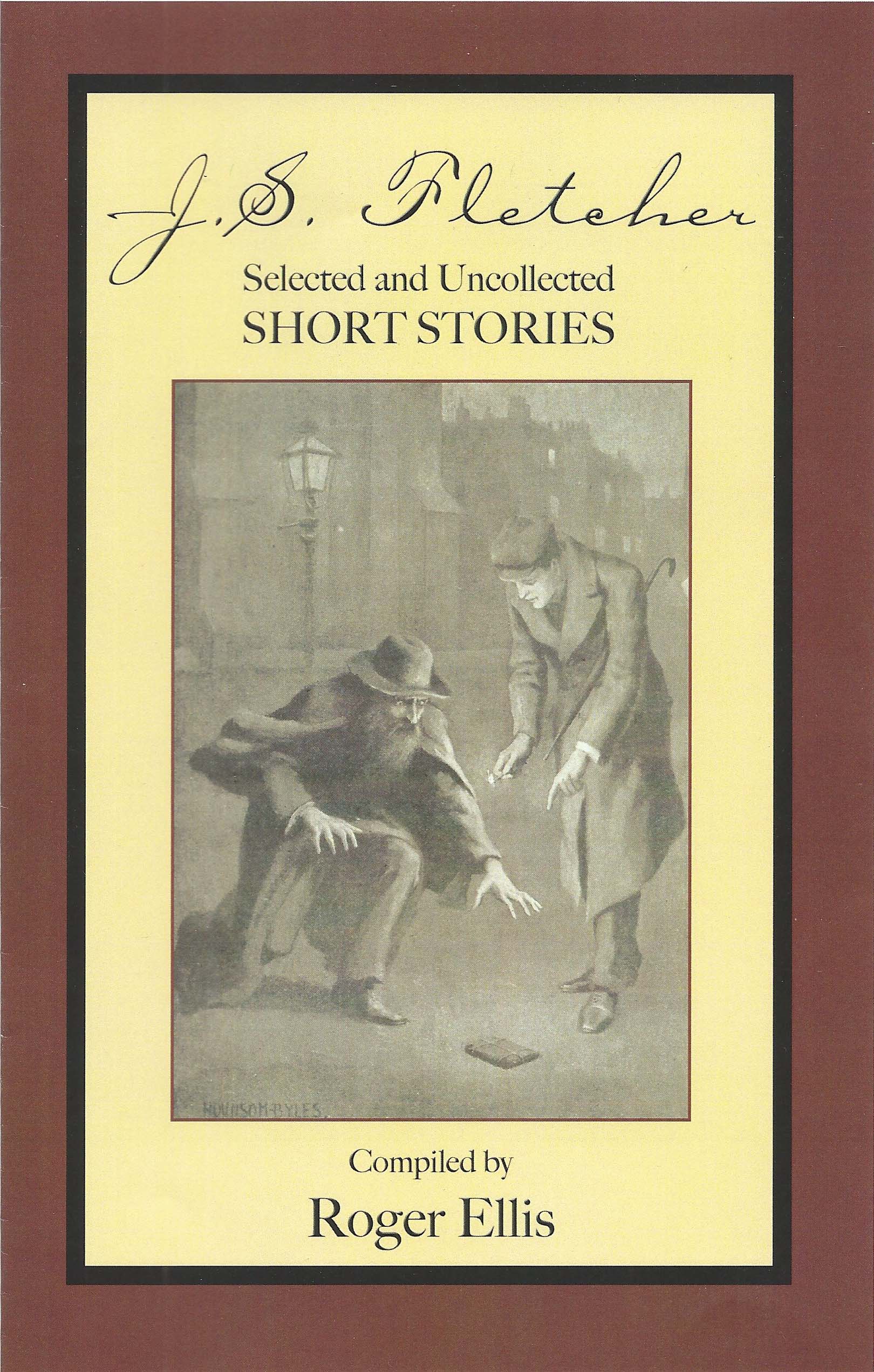 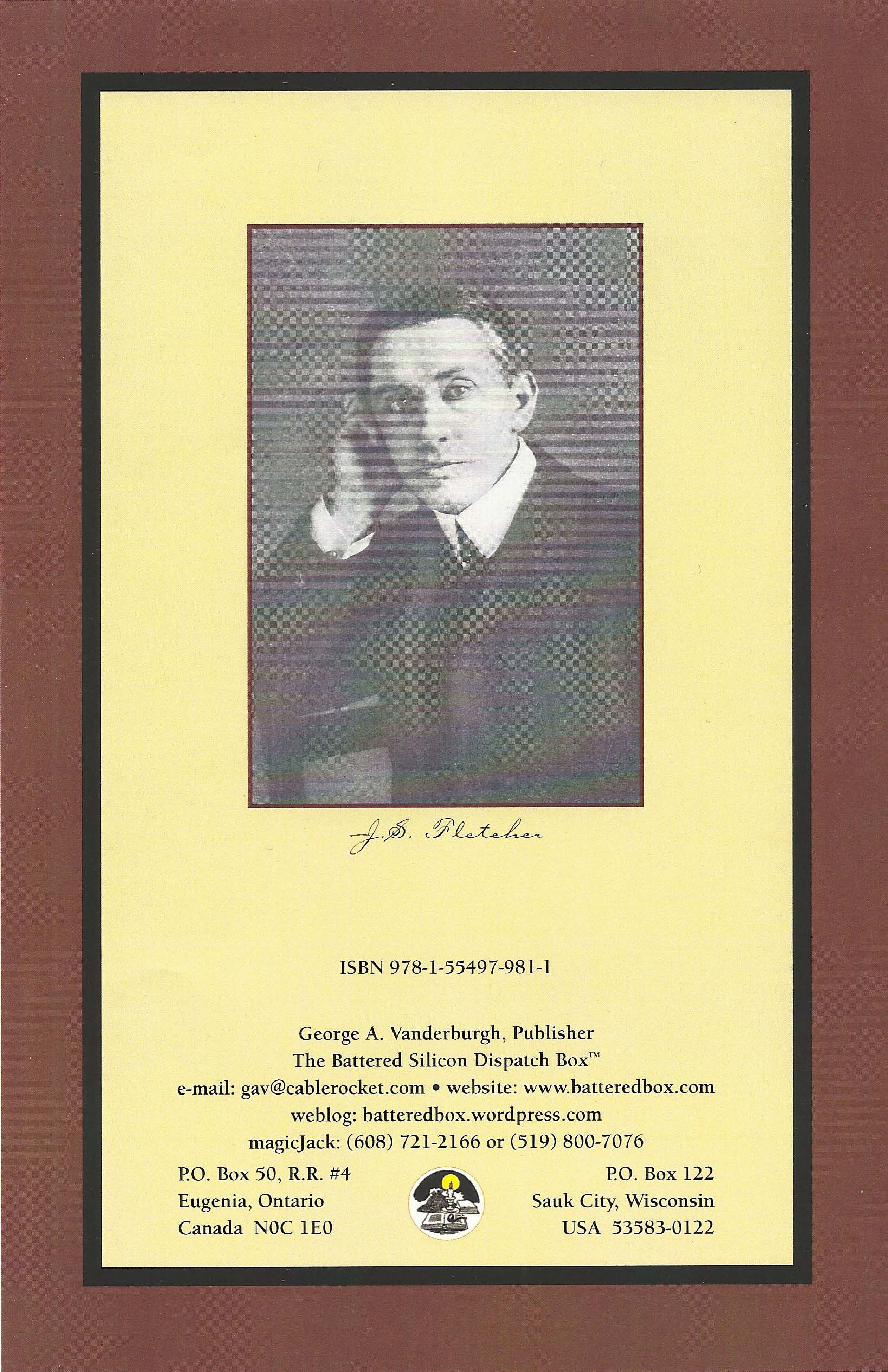 The Uncollected Stories
An Idyll of the Land
The Reason Why
The Oaks of Ravenscliffe
Sweetheart to Somebody
The Polonius Problem.
My Lady Diana
Father Dominic’s Confession

Selected Stories
The Death That Lurks Unseen.
The Fear of the Night
Mr. Poskitt’s Nightcaps

his book features rare material by the British author J. S. Fletcher. There are four uncollected short stories, three of which appeared in prominent magazines of the day, one gathered from a provincial newspaper and as an interlude to fiction, a short travelogue. For some reason these were overlooked and unlike most of Fletcher’s stories they were never to appear in book form. There is also an unusual short parody, pastiche, spoof, call it what you will. Often intended as critical lampooning of an authors work they may be viewed as a compliment to any writer’s style, whether good or otherwise. Finally there are two of Fletcher’s earliest endeavors at short story writing that emerged recently, both of which he published before his 21st year.

Like many authors of the so-called Golden Age, J. S. Fletcher contributed his short stories to a wide range of weekly journals simply to earn a living. As with his books they were an eclectic assortment, some with pastoral settings, mostly originating from his experiences as a youngster brought up in a bigoted rural Yorkshire community where religion ruled and life before the First World War had changed very little since the threat of Napoleon’s invasion. Others featured the lives of ordinary people with themes, some of which for their day might have been considered risque. In later life, he became a writer of detective novels, celebrated not only in his own country but also more importantly in the USA. Then no longer a teller of stories with a bucolic background he started to develop the craft of writing crime fiction. It was more lucrative and as he freely admits, life as a struggling writer started to reap the rewards of achieving a transatlantic reputation.

Fletcher wrote several hundred stories during his long writing career most of which were collected in the forty or so books that were published between 1883 and 1935. Some do surface from time-to-time but as ever there are a handful that rarely come onto the market. In the second part of this book I have included two stories from collections that are classed as falling into the rare category.

J. S. Fletcher led a very private lifestyle, one almost as mysterious as some of his novels. As a boy, he suffered from a strange malady that was never fully diagnosed. This caused interruptions in his education, home tutoring from his mother and plenty of time on his hands for reading. Despite ill health, Fletcher’s writing career began early with his first publication in 1879 at the age of 17. This was followed by several years as a young journalist, first in London followed by the setting up of his own publishing house in Bradford and Leeds before finally moving to the south of England towards the close of the 19th century. Then followed the acrimonious ending of one marriage, the reason itself shrouded in secrecy. Whether the cause was his developing relationship with Rosamund Langbridge the Irish author, a woman 17 years his junior remains speculative. This union led eventually to the birth of their only son Valentine in 1917 and to marriage in 1927, following the death in 1926 of Fletcher’s first wife, herself a devout catholic who chose because of her staunch faith to disallow him a divorce.

Throughout financial setbacks, relationship difficulties and the death of the two sons born to his first wife, Fletcher’s literary out-put was prodigious. At the height of his career, his publication rate averaged five books per annum, not including a mass of short stories and other journalistic material. This gave him an annual income of £6,000 considered to be a respectable income in the 1920's and 30's.

This medley of eight hitherto uncollected stories appear here for the first time.