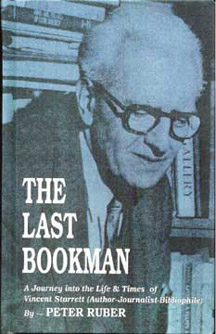 Vincent Starrett (1886-1974), the dean of American bookmen, comes alive in a biographical-memoir that has been out of print for more than a quarter century. His career as a journalist, war correspondent, newspaper columnist, and author of more than 50 books of essays, biography, bibliography, belle lettres, poetry and detective fiction spanned six decades. He was a mentor to such budding writers as Carl Sandburg, Ben Hecht and August Derleth. These men, Christopher Morley, and many others appear here with wry reminiscence. That Starrett left an indelible stamp on three generations with his infectious literary enthusiasms is evidenced by Ruber's engaging personal biography.

The original edition of The Last Bookman was published in 1968 in a handsome, folio-sized collector's edition that quickly sold out its initial printing. Several new tributes have been added.

The Toronto-born, Chicago-based writer and editor Vincent Starrett was often described "the last bookman." The compiler of this many-voiced tribute to Starrett is Peter Ruber who contributes his own reminiscences as well as almost 80 appreciations by such writers as Christopher Morley, Carl Sandburg, August Derleth, Ben Hecht, Franklin P. Adams, and Burton Rascoe. Included, as well, are contributions by Starrett himself as well as a bibliography. This book is a wonderful way to get "the feel" of Starrett and a sense of journalism and writing from the 1920s to the 1940s.

"The conversations between Starrett as master and Ruber as disciple are sometimes jocose, sometimes serious, but they all are sparkling." — American Book Collector

The Other Volumes in The Vincent Starrett Memorial Library